Twenty-six souls lost. A pregnant woman and her child, never to experience each others love in this world. A five year old child rendered unrecognizable after being riddled with bullets.

If your reaction to the incomprehensible horror of Sutherland Springs is to mock those praying for the souls of the lost and healing for the wounded, you should have your head examined. Perhaps the best method of examination would be vivisection, that we might learn what biological processes bear such demonic notions into existence while extinguishing them from our world. Alas, such authority can only be granted by God to the State.

At least those leftists predictably howling for gun grabs and about the collective guilt of the eternal violent white man are simply coping in their own way. Let us for a moment disregard the fact that the shooter, as a convicted felon, was already banned from possessing the instruments he would use to carry out his crime. Never mind that Obama and even Bill Clinton had plenty of opportunities to close the loopholes that allowed Devin Patrick Kelley to illegally obtain his weapons. This shooting is an example of precisely why more regulations cannot "fix" the problem of mass shootings in America.

I certainly disagree with those equating the NRA with ISIS or calling for an end to the second amendment, and I find them foolish. Yet, like a husband who clumsily proposes action to his wife when what she needs is commiseration in a situation he doesn’t fully understand, perhaps their hearts are in the right place. In contrast, a segment of the "tfw to intelligent" liberal gliteratti took this opportunity to tastelessly attack simpletons like myself who dare to pray for consolation and healing. 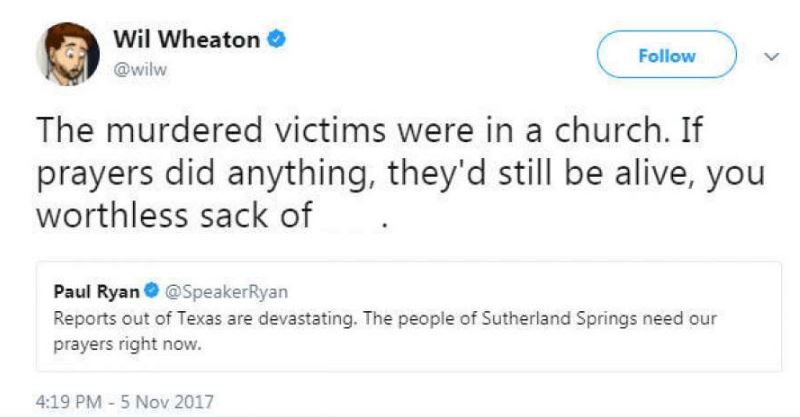 Just how hard does your heart have to be to suggest that “if prayer worked they wouldn’t have gotten shot in the first place.” What incredible depths of ignorance of Christian history are required, what infantile understanding of the notion of God is prerequisite for such a thought to even be conceived in the mind? In what upside down universe are Republicans responsible for a massacre committed by an atheist Democrat against the Christian family and congregation of his ex-wife?

Olbermann and King are two men who were particularly gifted by the Lord with extensive vocabulary and an uncanny ability to articulate their thoughts. They use these gifts to mock the faithful and to spit in the eye of the Lord, inverting and perverting their capacity to spread truth and light in the world. Throughout the bible, we can see that God expects more from men like these, whom he has given so much to. Therefore even the highest stack of firewood we could write LARPy fantasies about subjecting them to is nothing compared to what God has in store for such as these if they don’t repent of their ways.

But my brothers and sisters in Christ, let us not dwell on what we would do if we were in a position to dole out justice to these corrupt and base individuals. Do not attack or threaten them in your righteous indignation, because that would only deepen the slumber that leftists have hypnotized so many of our brethren into. We would be fools to become the monsters they want us to be.

Let us instead withdraw into our private places, into our chapels, our bedrooms, into our churches when they are empty (which is too often.) Let us pray for those who disdain prayer, for while they live there is still hope for them. In your hearts, you know that this is where true power lies. Don't let the vultures and jackals that pass as wise in this age make you doubt it for a second. The world needs your prayers, now more than ever, as it chides you for saying them.