The Anglosphere has fallen. With the looming legalisation of same sex marriage in Australia, every major English speaking country - with the exception of Northern Ireland - will have given in to assault on marriage and the family. What is more surprising than the result of the vote is the speed with which attacks on Christianity have followed and the brazen nature of these attacks. Businesses whose owners have opposed gay marriage have been inundated with requests to service gay weddings. Churches have been attacked and religious statues desecrated. There have been calls to remove prayers from the opening and closing of Parliament. But most seriously, there have been calls to force religious marriage celebrants to perform gay weddings.

These sorts of attacks have been seen before, all across the world, as Australia is simply following in the footsteps of other Western countries which have legalised gay marriage. The West has abandoned the very thing which propelled it to the pinnacle of civilisation - Christianity. With the fall of the Christian West a soft persecution of Christianity - which attacks Christians' rights - has begun, and a harder persecution is sure to follow. There is a danger then, that many people begin to focus too heavily on these attacks, and others even succumb to despair.

What we must remember though, is that this seeming destruction of society and the Church was prophesied by Our Lady of Good Success at Quito 400 years ago:

"As for the Sacrament of Matrimony, which symbolises the union of Christ with His Church, it will be attacked and profaned in the fullest sense of the word. Masonry, which will then be in power, will enact iniquitous laws with the objective of doing away with this Sacrament, making it easy for everyone to live in sin, encouraging the procreation of illegitimate children born without the blessing of the Church. The Christian Spirit will rapidly decay, extinguishing the precious light of the Faith until it reaches the point that almost total and general corruption of customs [morals]. the effect of secular education will increase, which will be one reason for the lack of priestly and religious vocations..."

This attack on Holy Matrimony is what we have seen beginning with widespread contraception, followed by no-fault divorce and culminating in gay marriage. The destruction of marriage and the family is almost complete, with marriage no longer even being considered by most.

"The Sacred Sacrament of Holy Orders will be ridiculed, oppressed and despised. ...The demon will try to persecute the Ministers of the Lord in every possible way and he will labor with cruel and subtle astuteness to deviate them from the spirit of their vocation, corrupting many of them. These corrupted priests, who will scandalize the Christian people, will incite the hatred of the bad Christians and the enemies of the Roman, Catholic and Apostolic Church to fall upon all priests. This apparent triumph of Satan will bring enormous sufferings to the good Pastors of the Church...."

The shameful scandal of paedophilia in the Church is what was here prophesied. The damnable actions of these priests have led to utter hatred of the Church and her priests and now all priests, both the holy and the perfidious, have been tarred with the same brush and good priests are now shunned and accused of paedophilia.

"Moreover, in these unhappy times, there will be unbridled luxury which, acting thus to snare the rest into sin, will conquer innumerable frivolous souls who will be lost. Innocence will almost no longer be found in children, nor modesty in women, and in this supreme moment of need of the Church, those who should speak will fall silent."

Today we see this luxury all around us as everyone seeks to have it even if it cannot be afforded. Most people now live of their credit cards and continue to spend on items of luxury with money they do not have. With the introduction of sex education and gender theories into schools and the spread of these vile ideas through children's entertainment, innocence is rarely to be found among them. And finally women have lost all sense of modesty. What began with the refusal to wear veils in churches has culminated in dressing like prostitutes. With this hyper-sexualisation of women, they often become either victims of predatory men or themselves become predators, preying on the lustful desires of men.

"The secular Clergy will leave much to be desired because priests will become careless in their sacred duties. Lacking the divine compass, they will stray from the road traced by God for the priestly ministry, and they will become attached to wealth and riches, which they will unduly strive to obtain. How the Church will suffer during this dark night! Lacking a Prelate and Father to guide them with paternal love, gentleness, strength, wisdom and prudence, many priests will lose their spirit, placing their souls in great danger."

Many priests today no longer care for their sacred functions and shamefully neglect the souls of those entrusted to their care. Confession is no longer preached as a necessity and oftentimes it is no longer offered with regularity. Without their sound guidance from the pulpit most today no longer understand the faith and millions have ceased to practice it.

After relating all of this all of this however, the Blessed Mother gave us these comforting words.

"This will mark the arrival of my hour. Therefore, clamour insistently without tiring and weep with bitter tears in the privacy of your heart, imploring our Celestial Father that [...] He might take pity on His ministers and bring to an end those ominous times..."

"To test this faith and confidence of the just, there will be occasions when everything will seem to be lost and paralysed. This, then, will be the happy beginning of the complete restoration."

When the attacks on Christendom are greatest, when defeat seems inevitable, when all seems lost, our Blessed Mother will be there to guide us to victory and restore her Son to His rightful place at the head of society. There is no need to misery, for hopelessness, for despair, as God has already won the great victory at Calvary. This does not mean, however, that we can simply lie down and wait for the restoration of society, as God uses human instruments to achieve His aims. What we must do first and foremost is retain the unadulterated faith handed down by the Apostles and transmit it through future generations. We must also not be ashamed to publicly profess our faith, even when it may cost us personally or professionally. And finally, we must actively seek to put Christ at the head of our society. While this may seem impossible, and even hopeless, we must keep before us the immortal and comforting words of Our Lady of Fatima:

"In the end, My Immaculate Heart will triumph." 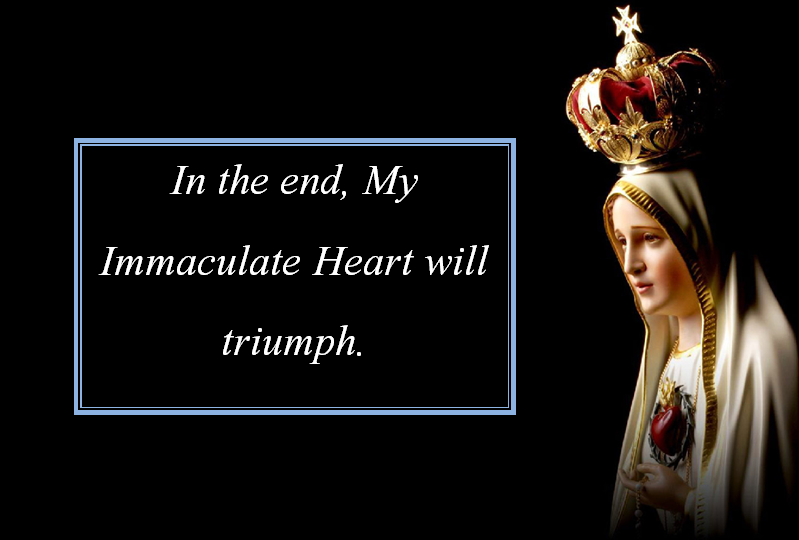