Although it appears to be an easy task being a Christian in Brazil – catholic or protestant – because of the vast number of Churches and reach of Christianity inside the Brazilian culture, as soon as one delves a little deeper into the faith the case ceases to be so simple. It ceases to be simple due to the fact of how the faith arrived in the country already bent by the Iberian tradition, and kept changing along the centuries that in the end became only a masquerade of false moralism. Outlining Brazilian faith, from a Christian perspective, is as disappointing as it is interesting, for we begin to see the same patterns repeating themselves throughout the world, giving us the feelings of both despair and understanding.

We were once a colony of the Portuguese Empire, and Christianity was the realm’s official religion when the kingdom defeated the Islamic menace (Reconquista – ended in 1492) after it nationalized the military religious orders of the Middle Ages (a process which began under the Pope Nicholas IV and the reign of Dom Diniz, 1290). The prevailing religion would change slightly each year that passed, to finally develop practices that would resemble the Caesaropapism system from the distant Byzantine East. After Centuries of hostilities and struggle, interweaved by peaceful years, Christians in the Iberian Peninsula would assimilate some Islamic oriental practices, notably the notion of a strong central power that controls and leads society to victory.

The Crown and the Cross would often fuse, and eventually the Church in Brazil found itself under the control of a central power, up to the point that it almost caused a schism during the imperial era - an event known as “Questão Religiosa” (Religion Question – a struggle between the “Brazilian Church and the Roman Church which reached its peak in the decade of 1870). The schism did not happen, but this quarrel contributed enormously to the wreck of the Brazilian Empire (ended in 1889), as the Crown lost support from the Church.

Under the empire, the upper classes were almost entirely masonic and against Christianity, doing all they could to hamper the natural growth of the Christian faith, which we may try to enumerate:

Of course, this scenario would someday divide the upper classes between the masonic republican elite, and the monarchist conservatives who would sooner or later be godforsaken by this political Church. This circumstance had arrived at Pope Pio IX’s ears when he wrote the Bulla Syllabus (1864), starting a personal struggle against the Brazilian Emperor Dom Pedro II. In the long run, the Emperor sided with the Pope, which made him lose all the support he had from his masonic politicians and totalitarian landowners. Nevertheless, the damage had already been done: Church and Crown would never reconcile.

This series of events would shape the religious minds of Brazilians in an intricate way, as religious life was always mingled with political life. The Pope John Paul II addressed this anomaly when he said that Brazilians are Christians by their feelings, but not truly by their faith. With a social life filled with Christian events – processions, novenas and public tributes to the Holy Virgin, promoted by the population and even the government – Brazilians did not develop their interior and silent spiritual progress, with the inwardness required to live a truly Christian existence.

The heavy toll that Christendom paid for this development is the anomaly that in five hundred years of existence, in a Christian nation that has the size of Europe, no saint, mystic, or even a considerable number of theologians arose to bring forth Christ to the world. What Brazil has, instead, is a mixed pious feeling that can be intertwined with other faiths that came to existence within our racial and religious miscegenation.

Which kind of faith this masonic clergy would convey to the nation - apart from these utilitarian public displays of piety, serving only to their purposes? Only a hollow shell made of empty rites, feasts and false moralism. Christianity was reduced to its exterior expression, only to be mixed with African and Indian paganism. People prayed not to attain heaven, but to be healed from tropical ailments. If Catholic Brazilians from the future gaze into their past, they will be looking at an empty house.

Blended with politics, the religious feeling also got involved with affairs of the state throughout the Republican era, and it is not easy now to undo this fusion. During the twentieth century both Catholicism and Protestantism were infected with Marxist ideas – as it happened with the case of the horrid Liberation Theology – and only now the traditionalist movements inside the Christian Churches seem to be waking in an attempt to redo evangelization appropriately. It is hard, though, to get rid from modern ideas of equality and to free Christianity from the social and political influences. Some priests get bashed by the media when they defend a strong conservative position and call out against multiculturalism or liturgies that place African witchcraft in front of the altar.

Marxism has already played a great role in our culture, as it played in the West. Whereas throughout the world the African cults disappear for the Islamic advance, in Brazil they spread under the demagogic intellectual aestheticism, and objective truths keep getting swept under the rug. Right now in Brazil a replay of the ancient conflict between Christianity and the pagan Roman religions is taking place. It is a conflict between a hollow social religion and the actual Church. 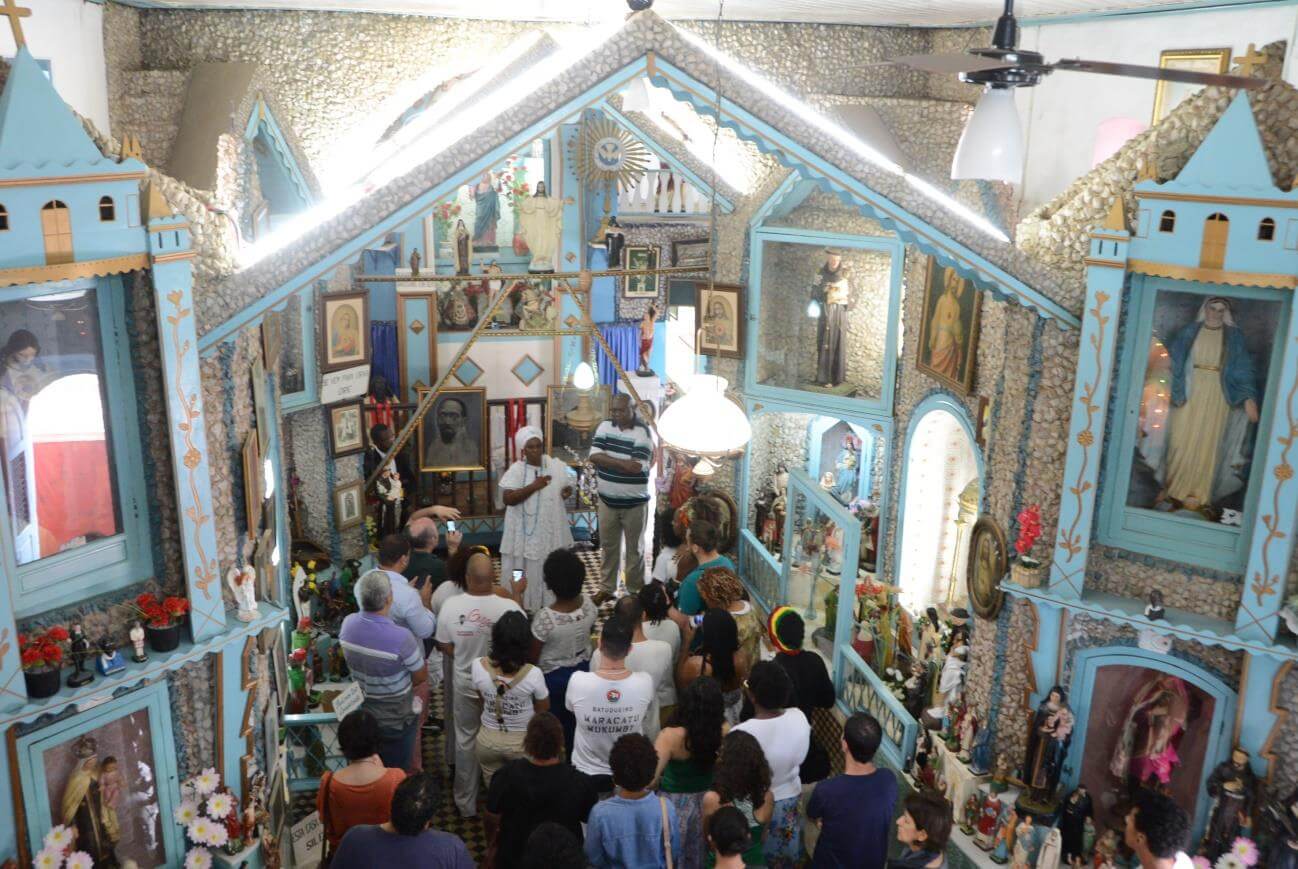 As said Saint Augustine “man is an abyss; what will rise from these depths, no one can see in advance”. But what seed did the Christian faith plant to be uprooted in the future? As long as one does not seek the revealed truths inside Christian facts aside of its body of ideals, it will always be impossible to solve the problem of faith, especially in Brazil. Christ did not come to give us a marvelous earthly life, but to lead us to heaven. While this fact is not acknowledged, the valuable life lessons taken from the sermon of the mount will always remain shallow. As Christ said in the parable of the mustard seed:

“How will we liken the Kingdom of God? Or with what parable will we illustrate it? It’s like a grain of mustard seed, which, when it is sown in the earth, though it is less than all the seeds that are on the earth, yet when it is sown, grows up, and becomes greater than all the herbs, and puts out great branches, so that the birds of the sky can lodge under its shadow.”
-Mark 4.30-32

The Portuguese empire brought already old mustard trees to Brazil, where they ended up dying. Instead of the mustard seed, to America came an already shattered faith from the reformation, where its vices were loosened, and its virtues were twisted. Twisted Christian virtues wander wildly, as said Chesterton, and do a terrible damage, for the modern world is full of old Christian virtues gone mad. While the seed is not sown, the Kingdom of God will never be understood. Only when the seed is sown, we will finally be able to heed the wisdom from the proverbs:

“How long, O naive ones, will you love being simple-minded?
And scoffers delight themselves in scoffing
And fools hate knowledge?

Turn to my reproof,
Behold, I will pour out my spirit on you;
I will make my words known to you.

Because I called and you refused,
I stretched out my hand and no one paid attention;

And you neglected all my counsel
And did not want my reproof;

I will also laugh at your calamity;
I will mock when your dread comes.”
-Proverbs 1:22-26